This is the story of Observer. All illustrations are available as NFT.
Click the illustration for a link to Opensea
(NFT marketplace). 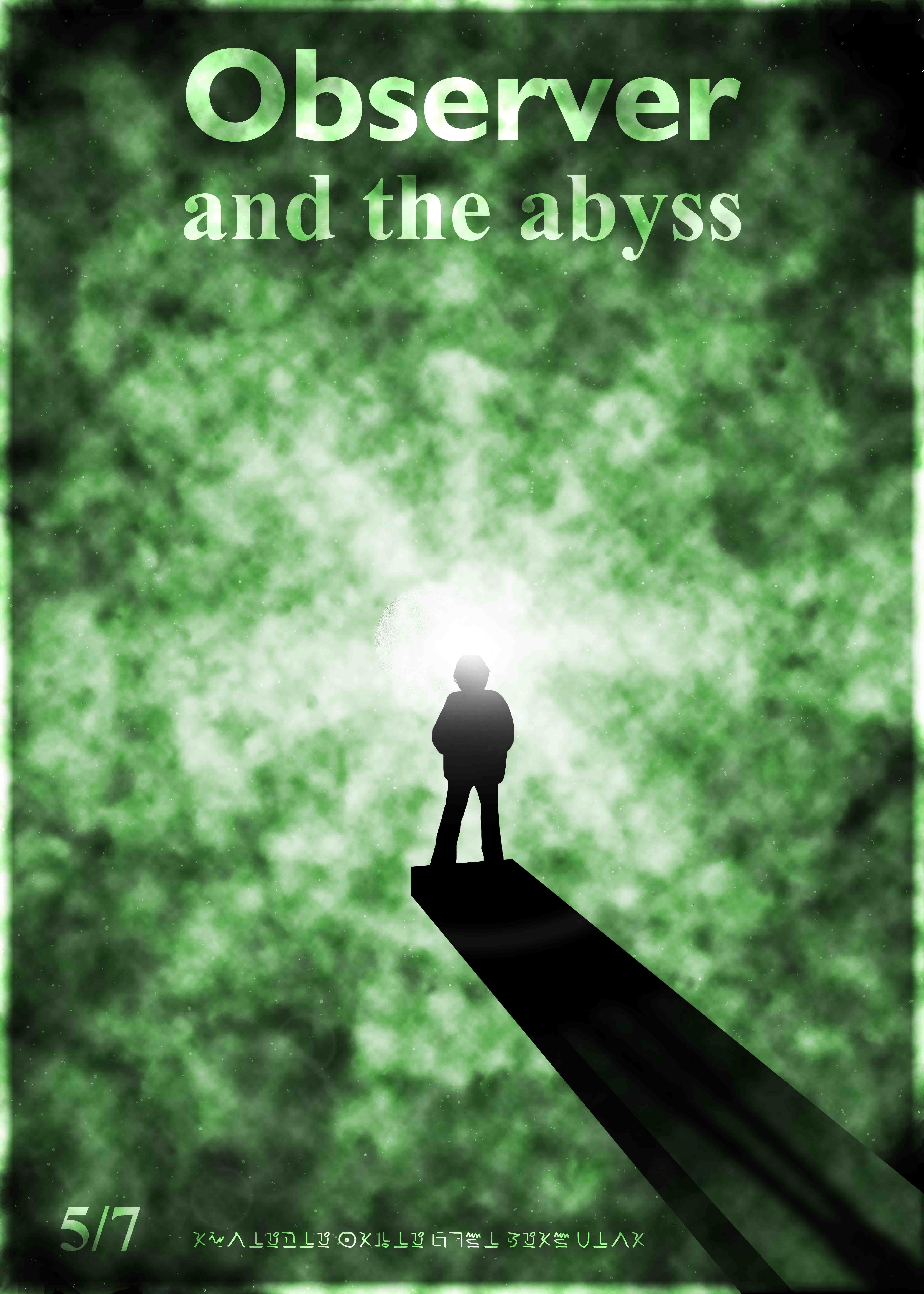 Once he was a man, now he is known as 'Observer'.
He can go almost anywhere in the blink of an eye.
He has chosen only to intervene when there is absolutely no other way.

When he needs time to think he comes here, the abyss.
A hole in space and the only place where he can go no further.
He does not know what lies beyond the abyss.

There are 7 editions of this first illustration.
Every edition has it's own color. 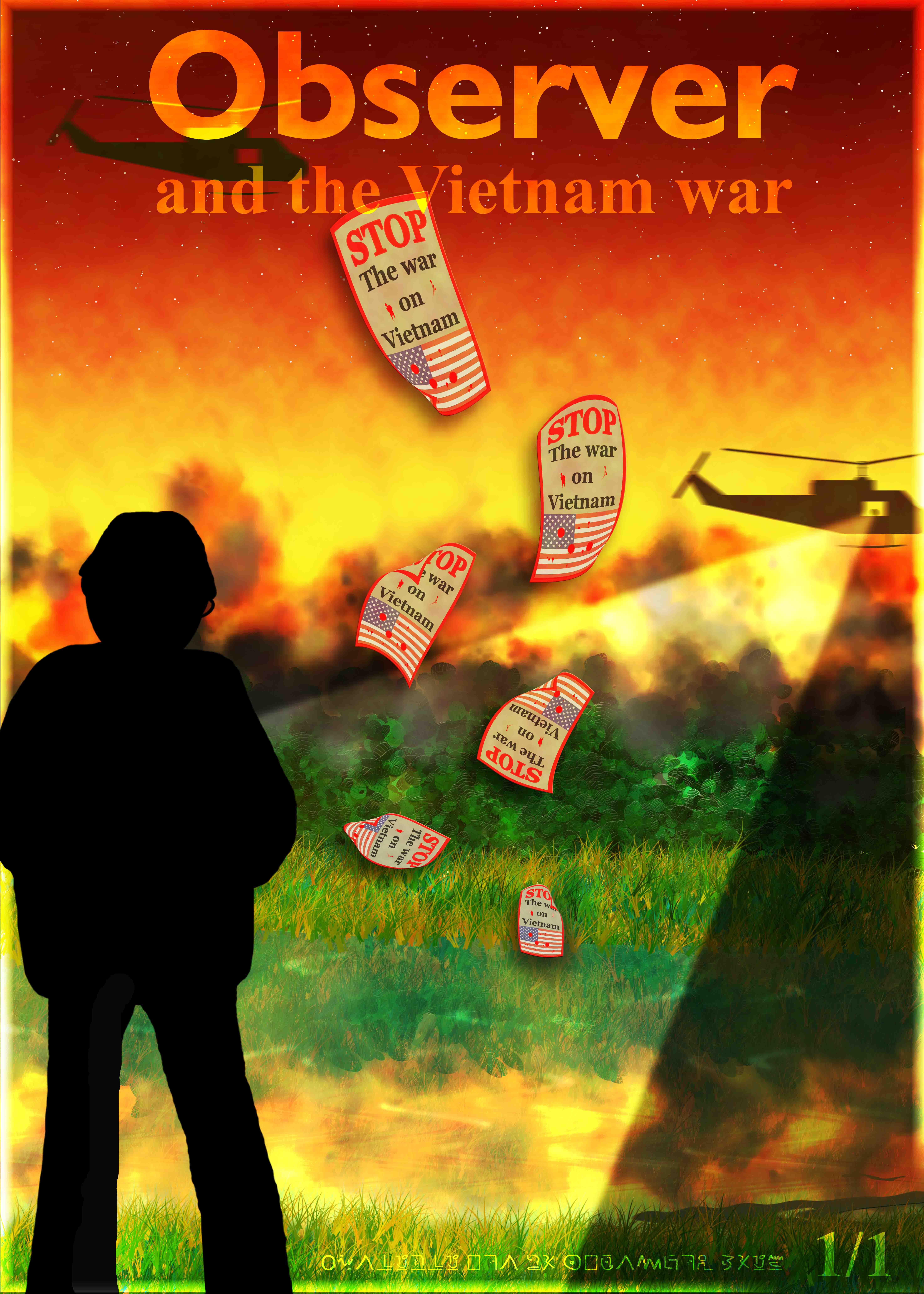 This is the first time Observer tried to intervene
and failed.
Held back by inexperience and not having
a physical form, he was unable to stop the fighting.

After giving up on directly influencing both sides
he decided that only a civilian protest
could end this war.
He started showing and telling students
at collage campuses what was happening.
This eventually resulted in enough political pressure,
resulting in the U.S. retreat from Vietnam.

Because even the peace agreement did not stop
the fighting made this another failed attempt
in the eyes of Observer.

He realized that the outcome of his actions
are unpredictable and this is one of the main reasons
why he has chosen not to intervene ever again unless
absolutely necessary. 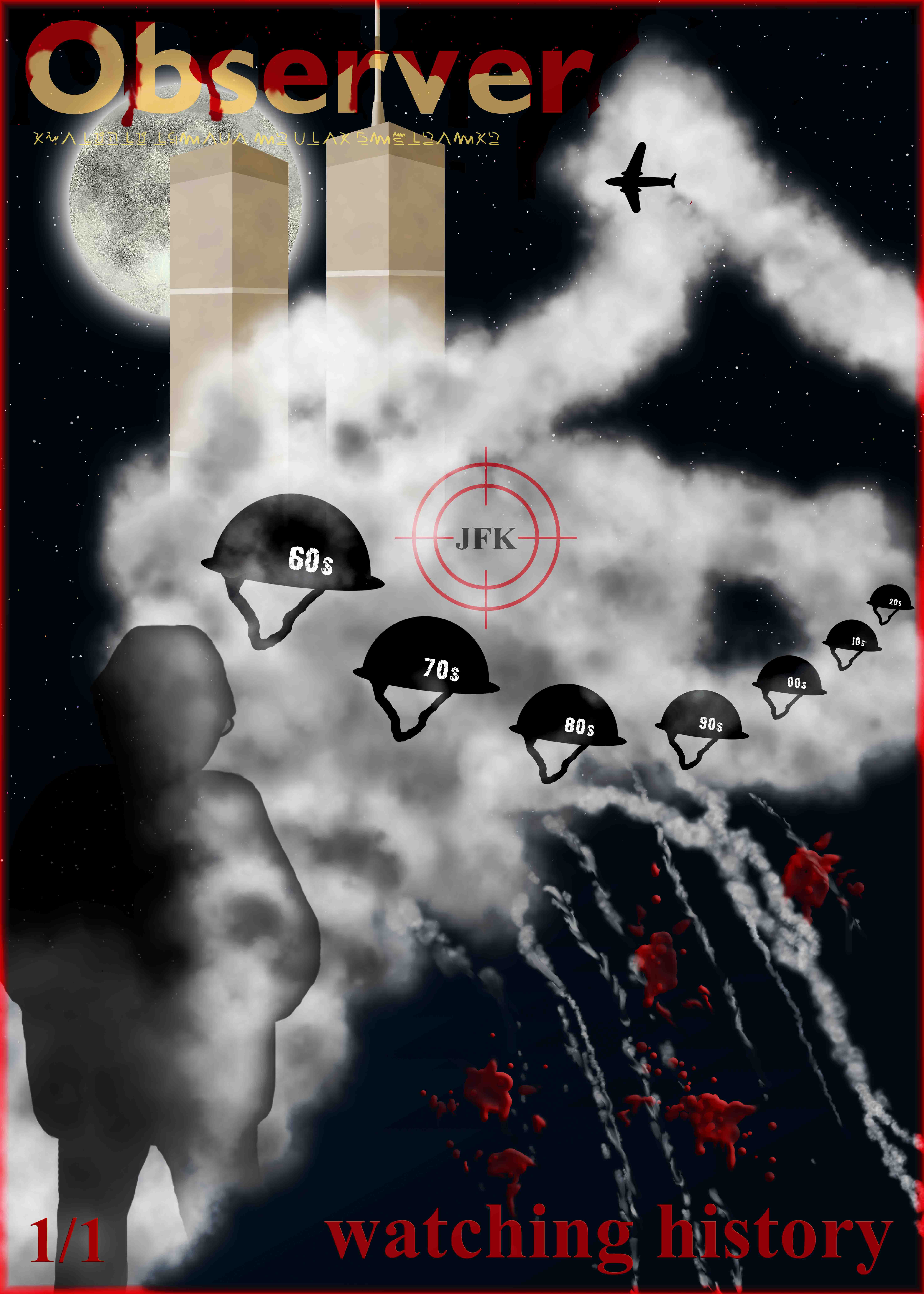 Observer has seen many of humans best and
worst moments through history.
Mistakes were made, wars were fought and
successes were achieved.
He watched and he learned.

Even though he can go anywhere he wants in the blink
of an eye, he can not be everywhere at once.
The inability to help everyone, made Observer bitter
and he decided to stop trying.
But after a while that didn't feel right either.

Now he only interacts on a personal level unless
there is a global incident about to happen that
must be prevented.

He is without physical form but he can make
visual illusions.
That is how he interacts with humans now.
With images that seem absolutely real. 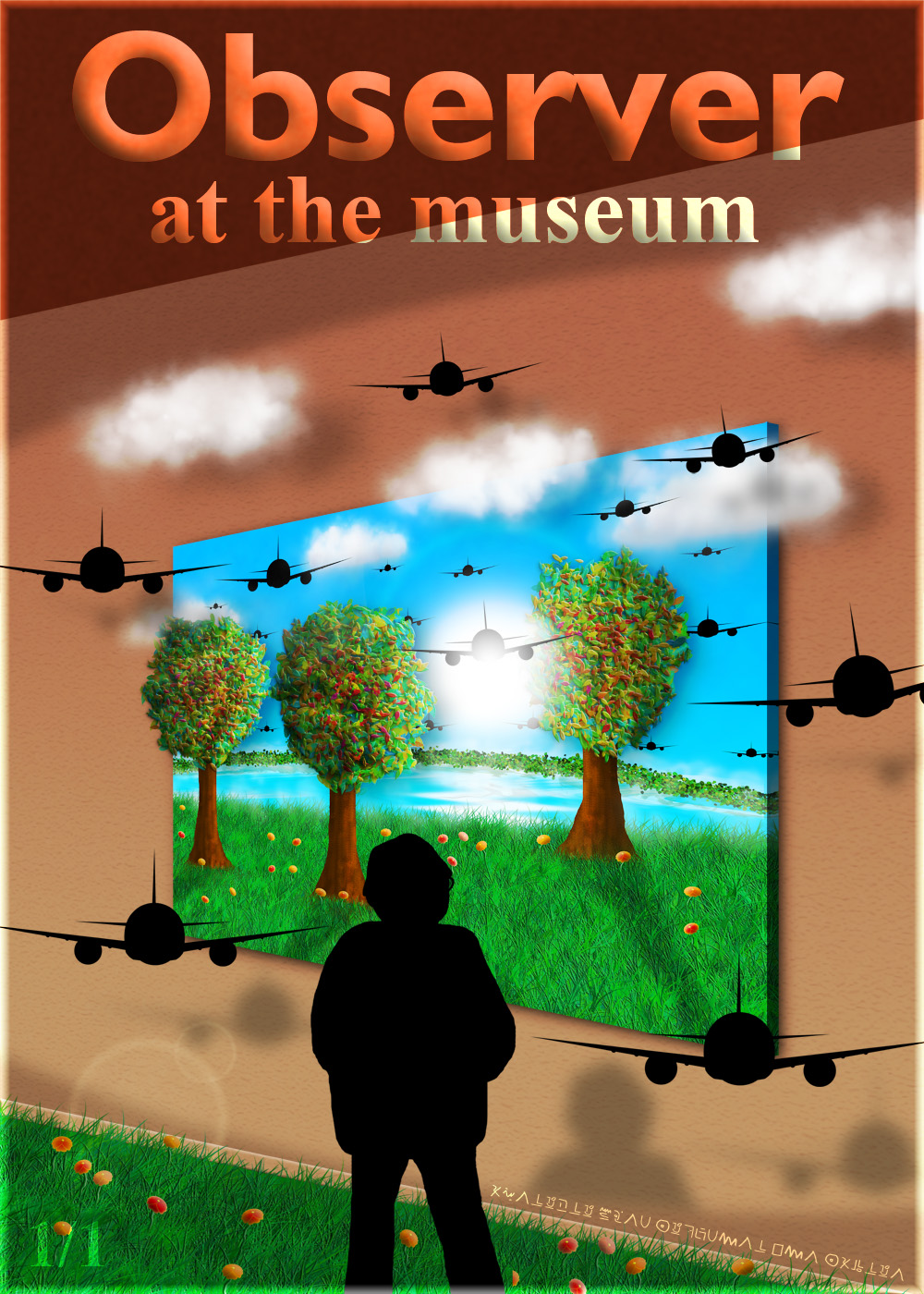 When he was still a man, he was often found
at a museum.
Now he practices his visual illusions there.

Observer has the ability to make you see something
completely different than what is actually there.
They remain illusions but can look very real.

The skill requires practice.
This is one of his first attempts at
environment manipulation.

Today he can make you see anything he wants
and you will never know it is an illusion,
unless he wants you to. 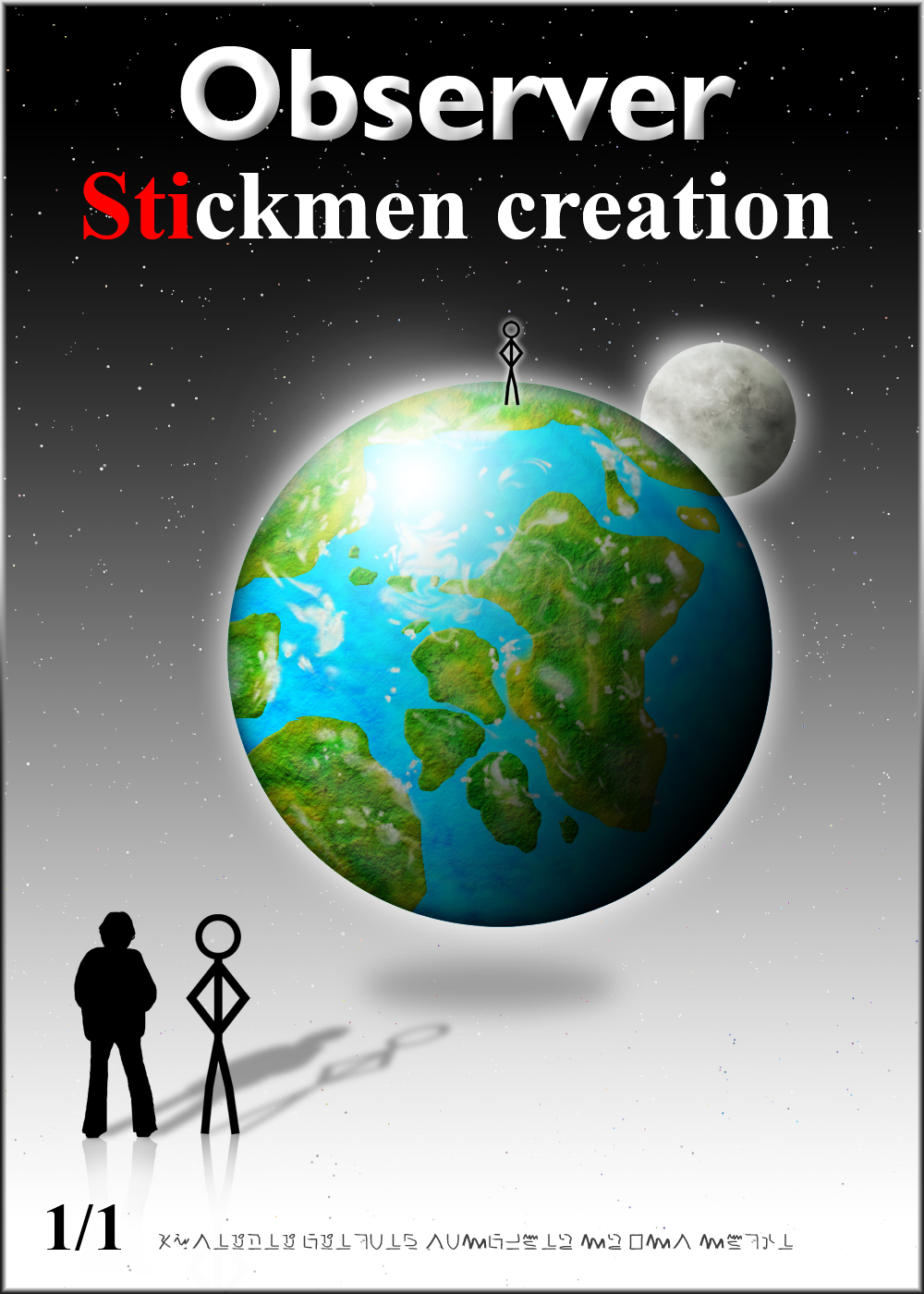 After practicing at the museum,
Observer returned to the dimension he lives in now.
A dimension where the mind is not a result of reality
but reality is the result of the mind.

He started creating his own worlds with simple
stickmen that lived on them.

Very many different types were created and he let them
interact with each other on their own. 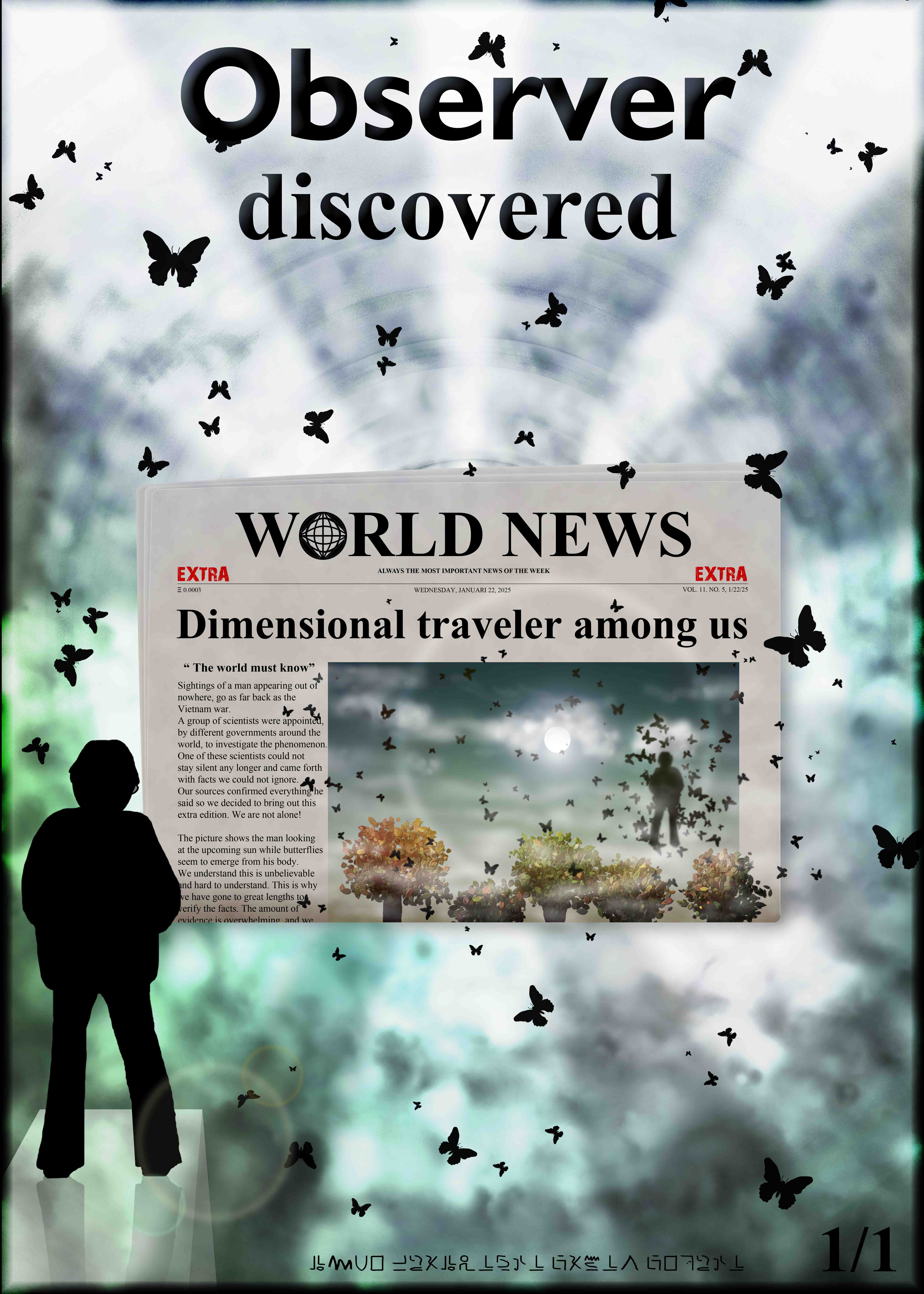 It was inevitable that someday, somehow,
humanity would discover the existence of Observer.
And so they did.

They are now able to detect him and catch him on
camera, even when he is invisible to the naked eye.

How will humanity react, now they know someone has
been 'walking' among them in secret?
Watching, learning, practicing, helping, intervening.
He must think about what to do now.

Will he reside in his own dimension, with his Stickmen,
or will he decide to come out of hiding and surrender
himself to the judgement of humanity?

This story is far from over.
Check in from time to time to read the next chapter.
© 2015-2021 Ronny Kamp | all rights reserved